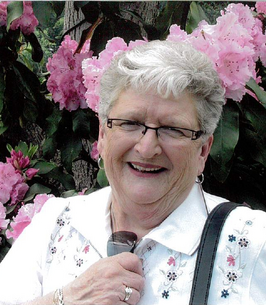 It is with sadness that Kay’s family announces her passing on September 12, 2022, in Olds, Alberta at the
age of 87.

Kay was born on September 16, 1934, to Kenton and Evelyn Mitchell in Watford, Ontario. She lived in
Watford until 1953, where she moved to London and received her Nursing Certificate at the Victoria
Hospital. Afterwards, she moved to Calgary and continued her nursing career at the Calgary General
Hospital. In 1958, she met and married Hugh Robinson. Their first son, Jonathan, was born in September
1960 in Banff, Alberta. They briefly lived in Sarnia, Ontario, where their second son Robert was born in
1962. In 1963 the family returned to Banff, and settled in Olds in 1967; here their last child Russell was
born.

When Kay retired from nursing, she found many ways to keep busy around Olds: She was a clerk at
many of the stores in town, worked as the Curator of the Olds Museum, and was a member of the
Accredited Supports to the Community charity. She had a natural talent for nurturing and caring for
others, and is fondly remembered by her family as a loving mother and a wonderful wife. Her horses and
cats received much love and attention from her as well. She was always ready to lend a helping hand,
and gave her friendship freely.

Kay is survived by her loving husband of 64 years Hugh; sons Robert (Teresa) and Russell, grandchildren Christy and Kara, and her many friends
and family members. She was predeceased by her parents, Evelyn and Kenton Mitchell, and her son
Jonathan.

The family would like to invite friends and family to an interment service on Saturday, September 17, at 1:30 p.m.

In lieu of flowers, memorial tributes may be made to the Alzheimer's Society of Alberta and Northwest Territories (G5, 5550-45 Street Red Deer, Alberta T4N 1L1)

This obituary is protected by copyright by Olds. Proudly Serving the Communities of Innisfail, Didsbury, Sundre, Three Hills, Trochu, Didsbury, Carstairs, Cremona, Hanna, Spruceview, Caroline, and Olds. Olds is located in the province of Alberta, Canada.

All rights reserved. This obituary is also archived at obittree.com