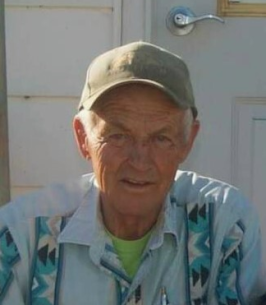 John Thomas ‘Tom’ Nicholson of Pine Lake, Alberta passed away at the Rosefield Centre, Innisfail, Alberta on Sunday, September 11, 2022 at the age of 87 years. Tom was born the second of three children to Percy and Mae Nicholson. He was raised on the family farm near Byemoor, Alberta. Tom was known for his hard work, and his willingness to lend a hand wherever it was needed. He considered everyone a friend and treated them as such. In 1959, he met Faye Campkin, who had taken a job teaching at the Byemoor School. He and Faye courted and were married at Easter Break in April of 1961. Together, they raised four children. During those years, in order to make ends meet, Tom also worked many jobs, doing electrical work for neighbors, as a telephone linesman, installing telephones in the Fenn Big Valley area, drilling water wells, as an elevator agent for Pioneer Grain, and operating his portable grain cleaner; all while working and expanding the family farm which he had taken over from his parents.
In 1992, Tom and Faye moved from Byemoor to Pine Lake, Alberta, where they continued to farm and were active members in the community. 2012 was their last year actively farming, and soon after, they moved into Innisfail, first in their own home, then in 2021, to the Innisfail Country Manor. In March of 2022, Tom had to move into the care of the Innisfail Health Centre; as his health from a lifetime of hard work no longer allowed him to live independently. Later, he was able to move into the Rosefield Long Term Care Wing. For Tom and Faye to be living apart those last months was very difficult, after sixty-one years of marriage. Tom passed on a legacy of service to others and faith and hope in the Lord. He was predeceased only nine days earlier by his loving wife, Faye, and will be lovingly remembered by his daughter, Sharon (Ray) of Lacombe, Alberta, his sons, Zane (Vicky) of Pine Lake, Alberta, Shawn (Beth) of Calgary, Alberta and Joel of Red Cliff, Alberta, his ten grandchildren and his four great grandchildren. He will also be deeply missed by his sister, Bernice Wilson of Edmonton, Alberta. Tom was also predeceased by a brother, Bill Nicholson. A Private Family Interment was held at the Holy Trinity Cemetery, Pine Lake, Alberta on Tuesday, September 13, 2022. A Memorial Service for Tom will be held at the Pine Lake Crossroads A.G Park, 10, 36366 Range Road 252, Red Deer County, Alberta on Saturday, September 24, 2022 at 3:00 p.m. There will also be an opportunity to pay respects to Faye at the Memorial Service as well. If desired, Memorial Donations in Tom’s honor may be made directly to Samaritan's Purse, 20 Hopewell Way NE, Calgary, Alberta, T3J 5H5 or at www.samaritanspurse.ca. Condolences, memories and photos may be shared and viewed at www.heartlandfuneralservices.com. Arrangements in care of: Heartland Funeral Services Ltd., 4415 – 49 Street, Innisfail, Alberta. Phone: 403.227.0006

This obituary is protected by copyright by Olds. Proudly Serving the Communities of Innisfail, Didsbury, Sundre, Three Hills, Trochu, Didsbury, Carstairs, Cremona, Hanna, Spruceview, Caroline, and Olds. Olds is located in the province of Alberta, Canada.

All rights reserved. This obituary is also archived at obittree.com